The Ordinance No 2827/2017/GR, issued by the Rectory of the Federal University of Santa Catarina (UFSC) on December 20, 2017, established a Commission with the objective of creating and making available a Collection on Human Rights rescuing the memory of the civil dictatorship period. -military, with regard to Human Rights, with emphasis on what happened at UFSC in that. This Collection initially gathers all the documentation of the UFSC Memory and Truth Commission (CMV-UFSC) and the entire collection existing in the Human Rights Memorial (MDH currently in the custody of the LASTRO-CFH of the UFSC), and can be expanded by donating Funds owned by individuals or entities.

The Acervo sobre Direitos Humanos project aims to digitally store and make available the documentation and testimonies collected by the UFSC Memory and Truth Commission, created by the University Council on December 16, 2014 (Normative Resolution nº 48/Cun/2014). To this material, will be added in a second period the documentation of the Human Rights Memorial, organized by the LASTRO Laboratory of the CFH of UFSC. New personal and entity funds on human rights violations during the civil-military dictatorship of 1964 have been gradually included in the Collection.

The UFSC Collection on Human Rights also aims to build a Memory on Human Rights in Brazil, conserving and making public historical documents that deal with violations of these, in particular those that occurred during dictatorial historical periods of the 20th century or related to populations such as indigenous and black people.

The Collection on Human Rights was integrated, as of the second half of 2019, as one of the activities of the Instituto Memória e Direitos Humanos (IMDH) of the Federal University of Santa Catarina. I replaced will be with was.

What documents are being digitalized?

The UFSC Memory and Truth Commission (CMV-UFSC) collected during all its activities, from December 2014 to May 2018, a collection of approximately 1 TB containing a large amount of documents from official and private archives, approximately 2500 scanned images and documents, more than 50 videos and audios. In addition, personal collections of protagonists of the time and entities (OAB, for example) were delivered or promised to be archived by the Commission.
In view of the large number of material collected during the operation of the CMV-UFSC, and existing in the MDH, the effective perspective of expanding this documentation and the importance of storing and conserving these documents, the organization of a repository for them and their wide availability to the Academic Community and the Community in general, the decision was taken to digitize all this material, to organize it in a digital collection, entitled Collection on Human Rights and to make it available through a website with an appropriate interface.

What is the Memory and Truth Commission of the Federal University of Santa Catarina?

The Memory and Truth Commission of the Federal University of Santa Catarina (CMV-UFSC) was created by Normative Resolution nº 48/Cun/2014, after a unanimous vote at the University Council session of December 16, 2014. This Resolution is in line with the objectives and guidelines defined by Laws No. 12,528/2011 and No. 16,183/2013, which established the legal mechanisms for the redemption from the memory of the facts that occurred during the period of the exception regime in force in Brazil between 1964 and 1988. The CMV-UFSC Final Report was delivered to the UFSC Rector and presented to the community on May 14, 2018. Delivery of the Final Report from the Commission to the UFSC University Council took place on September 25, 2018, being unanimously approved.

What is the Human Rights Memorial (MDH) of the LASTRO Laboratory at UFSC?

The Human Rights Memorial (MDH) was created in March 2005, in the context of the LASTRO Laboratory of the Center for Philosophy and Human Sciences (CFH) at UFSC.
The MDH aimed to be a theoretical-sociological reference center in the treatment of information and documents related mainly to the period of the regime. military-civilian dictatorship from 1964 to 1985. Among others, the sociological and historical connections with other past and present periods are considered. From the perspective of the different approaches of the Social Sciences, its object is delimited taking as center of attention the events outlined in the political, socio-cultural, labor, education and students. The living and material memory to be rescued, organized and made available, makes it possible to achieve this objective. general also as an initiative – institutionally constituted – focused on information and training.

How to collaborate with this project?

Material, newspapers, photographs, films concerning human rights during the dictatorship period, particularly those related to UFSC, are of interest to the Commission responsible for the Collection.
If you consider that you have any type of material that is relevant within this historical context, please fill in the contact form further down this web page, identifying themselves and briefly describing the type of material they could give away or reproduce to be part of the Collection on Human Rights. We will then contact you for more information, and, if approved, will be part of our collection

"The victims of now will be free in the future.
Today's torturers will be tomorrow's defendants.
In the courts of history, force is useless.
No one has privileges. Everyone is judged by their deeds."[1] 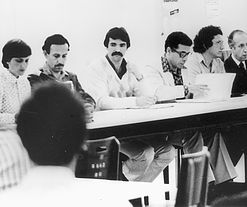 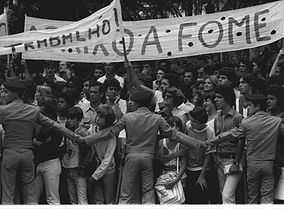 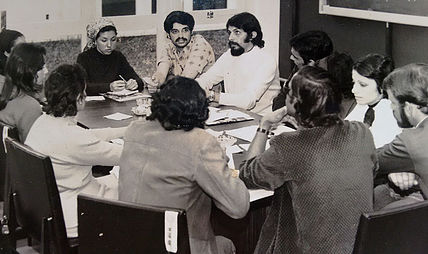